This article refers to the character. For the game, see Showdown Bandit (game).

Role in the show

He's a slightly pale puppet with orange hair and four red marks on both cheeks, as well as a cut along the right side of his face, with two silver staples holding up his jaw.

He wears a fading black hat with bullet holes and a purple band. He wears a red bandanna and a purple shirt with rolled-up sleeves underneath a black vest with red trim and two gold buttons on the right side. He also wears a belt with the same pattern, dark brown pants and black boots.

Although he doesn't talk during the whole game (except on a TV commercial), his posters and hinted on the TV commercial shown in one of the rooms of Chapter 1 hint that he seems to be cheerful, but also calm, seen when all the stringless puppets and other monsters that try to kill him.

Episode I: Showdown Bandit and the Trail of Shadows

After being released from his box by Miss Undertaker, Bandit falls out of it as he is stringless. Later, two lines of strings are shot onto Bandit's wrists. Failing to struggle free, he is pulled upwards and starts screaming, before being fully controlled by strings.

Bandit wanders around the stage, meeting up with some of his allies and new stringless enemies. As he reaches the final room, he is surrounded by masked figures, not long before being grabbed by a human hand, which might be the one pulling his strings.

Showdown Bandit from his teaser video. 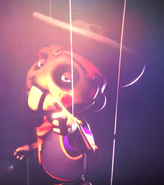 Showdown Bandit pointing at you.

Bandit almost gets attack by an Araknit in another trailer. 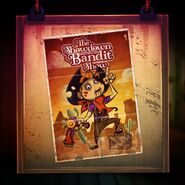 Poster of the Showdown Bandit show Showdown Bandit in his show.

Showdown Bandit looking at the Stringless.

Showdown Bandit in the Steam's thumbnail

A hidden teaser found in the steam info. 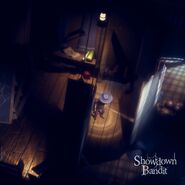 Bandit in the Poster 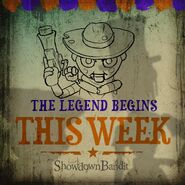 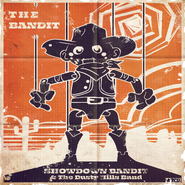 Showdown Bandit in the other Poster

Bandit, being pulled by strings.

Bandit, approaching another, hung up, Bandit.

Getting the Bandit Pop Pistol for the first time. 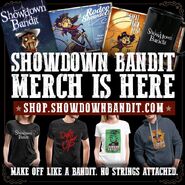 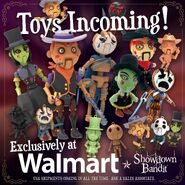 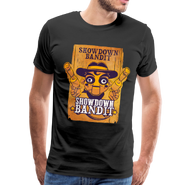 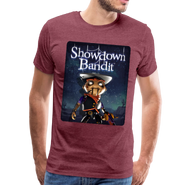 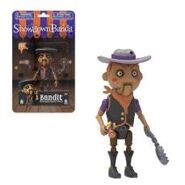